I was not allowed to board the flight at delhi air port and my ticket no[protected] was cancelled by air india staff at the delhi airport
I tried to contact many times the air india customer care and mailed them but no response i got.
I need to know my refund status of my ticket

Hello,
I have been on call with Air India support for about 10-12 hours of the day to book my flight. The original flight timing has been randomly been canceled without letting us know.

Air India cancelled flight AI-852 PUNE- DELHI flight(15th Aug). They are not refunded or receive my call or change the flight timing.

Air India — Ticket refund not issued even after one year!!

I had already placed a complaint through this website and the status is marked as resolved just because the matter was sent to air india by email.

Air india has not done anything so far in terms of processing my refund.

I will consider taking this case to consumer court.

Before that I am going to file complaint again on this site so I can keep records of all the efforts that I did to get this resolved.

my initial complaint is:

I booked air india international flight from Paris to Delhi for travel in July 2020. After multiple failed transactions I was issued a ticket but money was deducted each time. Money was refunded for some of the transactions but I came to know later that two tickets were issued on my name for the same flight on the same day!! So i contacted air india and requested them to refund one of the tickets but refund has not been processed till now. E-commerce section does not respond to phone calls (I called them at least 500 times) following which I emailed them multiple times only to get replies stating refund will be processed but has not happened till now. I contacted air india complaint/feedback department and they registered a complaint with a reference number (WB-IPAR[protected] but no redressal until now. I have also contacted the vigilance department of air india regarding corruption by cheating the customer off of money by selling ticket twice on the online platform for the same flight and the vigilance officer emailed back asking the e-commerce section to provide refund but this has not been done even after intervention from vigilance team.
I do not have any other avenues to resolve this matter so I am registering my grievance here.

Aug 8, 2021
I Had booked a flight for 1st september, 2021. I want to reschedule my Flight on 29th septemner, 2021. I am Contacted the customer service on 7th August, 2021 and resedhuled my tickets and paid the difference amount which is also confirmed by the customer support but till now not issued my tickets and now every time I call customer support they said have to transfer the call to ticketing depatment and not able to connect ticket department no one is able to connect me to some one who can issue my reschedule tickets??? Seriously ?? Every time i am in hold for more than 45 minutes to 1 hour and then the call is getting disconnected automatically. Seriously is this the way how air india treats their customer. I need a reply ASAP on this .
My PNR # YTQW8, YPHN9

I didn’t get refund

Air India — I’m complaining regarding refund of my air ticket

I booked a flight from air India website, departing from Delhi to Torronto on 3rd May 2021. It was postponed due to corona. So i cancelled the flight as it was refundable. i cancelled it on 24 May 2021, i called customer care to cancel it. They then initiated the refund process and then i mailed my details and request for refund at [protected]@airindia.in on the same day. i was given assurance that i would receive my refund within 21 working days. It now has been more than two months yet i haven’t receive my refund nor any email from air india on when i will be getting my refund.
The refund amount is Rs.1, 28, 209.
my e-ticket no. is[protected].
my flight no. is AI 187

Air India cancelled flight AI-852 PUNE- DELHI flight(15th Aug). They are not refunded or receive my call or change the flight timing.

AirIndia Cancelled their flight and I have got no refund. Flight details attached in below image. none of the below number is working to contact to air india. 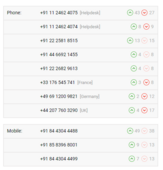